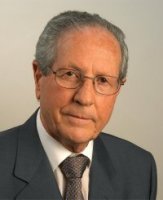 Born in 1924 in Castejón (Navarra, Spain). At the age of 12 he moved with his family to Manresa (Barcelona) where he got to know the Gospel and was converted to Christ.

Immediately after the end of the Civil War, in difficult circumstances he had a profound spiritual experience that took him to devote his life to Christ and His service. In the summer of 1943 he was called by D. Samuel Vila, pastor of the Baptist church of Terrassa, to work in various forms of ministry. In May 1948 he was invited by the Evangelical Baptist Church of Gracia (Barcelona) to accept the pastorate. He accepts the invitation, so that a successful thirty-year pastorate begins. In 1979, due to illness, he had to resign the pastoral ministry. By this time the congregation had grown from 100 to 400 members. In the last twenty years he devoted himself mostly to literary work, biblical-theological teaching and occupied positions on boards and committees of various evangelical entities. He has been the director of the magazines “El eco de la Verdad”, “El cristiano español” and later the Christian theological journal “Aletheia”. He has been secretary and afterwards president of the Spanish Evangelical Alliance, professor and chairman of the Evangelical Center for Biblical Studies (CEEB – Barcelona), president of the Federation of Independant Evangelical Churches (FIEIDE) of Spain, president of the International Federation of Free Churches, the Bible Society and Scripture Union.

Formed theologically in the line of the London Bible College he expands his formation with theological works in the German language. His biblical-theological background gives his work the character of academic writing, although easily understandable by the large readership. His most successful work is his book Hermenéutica Bíblica (Biblical Hermeneutics), the result of extensive and thorough research work. From his evangelical position he is open to dialogue with modern trends in all fields and at the end gives a personal synthesis which is purely biblical.